skip to main | skip to sidebar

Windows 10 Apps from Windows Store Will Not Start

So Microsoft has taken away the old calculator, and given us a new one that runs on the new WinRT side of the house. As a result, when applications from Windows Store would not run, I was out of a calculator.

Then I followed the message here to "Microsoft-Windows-TWinUI/Operational". It really did not give anything more: 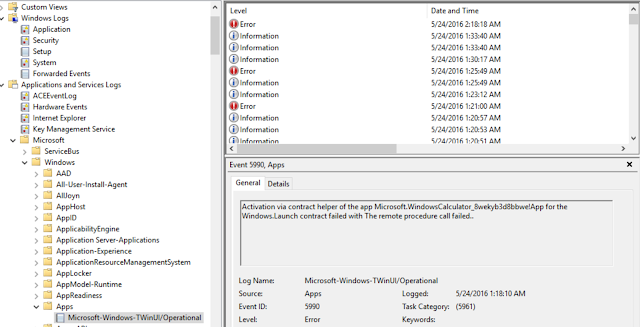 I tried uninstalling it. Nothing happened after I selected "Uninstall" from the popup menu.  Microsoft has a site that can perform diagnostics, so I tried it:

So I am on my own. I started a power shell window in admin mode, and ran "Get-AppxPackage *calc*":

Apparently if you have your screen scaled above 100% because of a 4K display, or if you are using a different language add-on, this is what you could get sometimes: broken Windows Store applications.

I also had the same problems with Microsoft Solitaire Collection. I used the same fix, and that is now working also.

Update: on a different laptop running Windows 10, I got the same error on the Windows 10 Store application itself. The Windows 10 Store app shows a blank icon on the task bar. It is as if there is no application icon in that spot. When I clicked on it, The Store windows comes up briefly and then just disappears. "Sfc /scannow" etc. did nothing. Troubleshooting tools did nothing. The same steps showed that it was missing a scale 125 file and one for the language "zh-hans" as well. So Again I copied the scale 100 files to 125, and copied the default language folder to the missing "zh-hans" folder name. Now the icon is back, and the Store application launches fine.

Apparently this is a problem that has been plaguing Microsoft for quite some time. Even in the Windows 8 days a couple of years ago it had the same problems: http://programount.blogspot.com/2014/08/fix-windows-81-cannot-launch-pc.html. Even with the causes known for so long, they still cannot manage to fix it.
Posted by Dr. Tan at 3:08 AM